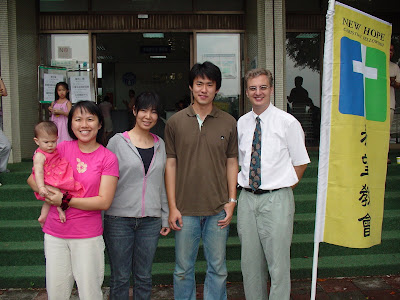 Last week we had a guest come to our church: a young Taiwanese man named David Ông. He just graduated from seminary. He's from Tainan in the south. And he plans to become a pastor here. We are so happy to meet young men like him.

David wrote about his visit to our church and home in his blog. He posted a lot of pictures.

For the past few weeks another young man has been coming to our church. His name is Eric Yu. He is a Taiwanese from I-Lan City. A 30-year-old, he just graduated from Christ's College because he had worked and then gone to do military service after high school. Eric is fluent in Taiwanese and Mandarin and has a good command of English. I was introduced to him by Dr. Quentin Nantz, the current acting president of Christ's College and an MTW missionary. After I met him at Christ's College, he began to attend a Thursday men's discipleship group led by one of New Hope Church's new elders. He also began attending our churches service. Please pray for him as he decides whether or not to go into the ministry. He'll have to find a way to support himself while he goes through seminary.

I also want to mention my Taiwanese pastoral intern, Caleb Tian, who is now a licentiate in the Reformed Presbyterian Church. He and his wife just had a baby son. Already having a Bachelor of Divinity, he has one more year to finish an M.Div. at the Reformed Theological Seminary in Taipei before taking his ordination exams. Please pray for Caleb this year as he tries to provide for his family while finishing up seminary. His wife just this week decided to quit her job in order to take care of her newborn, and so their income will be drastically reduced. It was a hard decision for them that went against the cultural grain of contemporary Taiwan, but it was a good principled decision.

Thanks for your prayers. In Christ,

Joel
Posted by taiwanchurch at 9:10 PM No comments: