Please pray that Christians in Taiwan will better impact children in their formative years. Children will pick some role model to follow. Unfortunately, many role models on the internet are not good; there is a dehumanizing trend that distorts the way God created us.

"A recent poll in Taiwan of 13,000 students revealed nearly half started surfing the internet before the age of seven, and some start as young as three.

It found a correlation between the frequency of online social networking and the level of concern with appearance and self-image."

One fad driven by the internet is that children put on hours of makeup to make themselves look like barbie dolls. 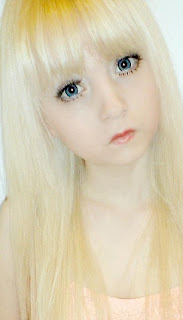 Children are lost and need an identity as an adopted child of God.
Posted by taiwanchurch at 11:36 PM 2 comments: