Baptism of my daughter Seren: 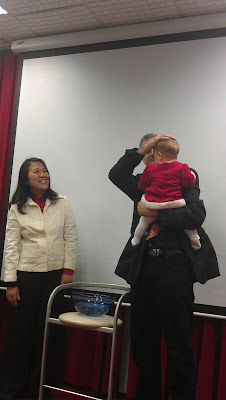 Following are the questions used for baptism of children with Mandarin translations:

For to you is the promise, and to your children, and to all that are far off, even as many as the Lord our God shall call unto Him. And I will establish my covenant between me and you and your seed after you throughout their generations for an everlasting covenant, to be a God unto you and to your seed after you. Believe on the Lord Jesus, and you will be saved, you and your household. (Acts 2:39; Genesis 17:7; Acts 16:31)

Questions for the believing parents:（信主的父母請回答下列問題）

Do you acknowledge your child's need of the cleansing blood of Jesus Christ, and the renewing grace of the Holy Spirit?

Do you claim God's covenant promises in your child's behalf, and do you look in faith to the Lord Jesus Christ for your child's salvation, as you do for your own?

Do you as a congregation undertake the responsibility of assisting the parents in the Christian nurture of this child?

Posted by taiwanchurch at 2:37 PM No comments: 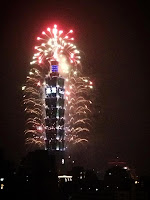 We are having a series of joyous celebrations at New Hope Church in Taipei, starting with our Christmas service. Next week we will have another big celebration. It so happens that New Hope Church was started almost 10 years ago to the day of next week's worship service.

In the summer of 2002, Judy recorded a gospel outreach music album in Nashville. In September 2002 we arrived on the mission field for the first time to begin church planting in Taipei. For three months, I took full-time language study. We also began investigating record companies to release Judy's album and to help host Gospel outreach concerts. (In 2003, while I helped start New Hope, Judy released her Gospel outreach album. Judy and I probably did about 50 concerts partnering with local churches all around Taiwan where she performed, I shared a Gospel message, and the local church members tried to outreach to their neighbors and friends.

Meanwhile, three families met to plant a church. Judy and I met with the Conklings (Tim and Evie) and the Changs (Harry and Grace) to choose a location and plan a church plant in Taipei. We did not have any extra funds raised as is common in American church planting works. We only had our own mission support. But that was enough to get things going. God was gracious to provide.

On January 5, 2003, New Hope Church held its first worship service, renting the gymnasium and classroom from an Bethany Christian School, near two of the largest universities in Taiwan: National Taiwan University and National Taiwan Normal University. We have since moved facilities twice in the same area and now worship on one of N.T.U.'s campuses, with good parking facilities.

Further we tried to foster an atmosphere of every attender actively participating rather than passively sitting as if listening to a lecture or watching a performance. As a result, one distinct characteristic of our assemblies was a time of question and answer where the members could ask anything, and the pastor would answer from Scripture alone.

Third, New Hope's leaders tried to embody 2 Timothy 2:2, where men were always being sought out, mentored and trained for ministry. The membership of New Hope graciously encouraged these interns -- both Taiwanese pastoral interns and foreign missionary interns -- over the years as they were given many opportunities to preach, lead Bible studies, and worship to explore and hone their gifts.

New Hope's bilingual nature has meant that we have had worshippers from many nations. On average about half those attending have been Taiwanese and half foreigners. Over the years, New Hope has also been characterized by a high turnover as people come for several years and then move away. We have had many bittersweet goodbye parties. And many of our friends are sorely missed. Recently, New Hope has seen an increase in membership of Taiwanese families who have helped to stabilize the church's membership.

Even as we thank God for our past ten years, please pray for New Hope Church this year as they plan to seek God's will for their future.

這個星期的一月六日，就是我們正式成立的十週年慶了 This week, January 6th, is our official 10th anniversary.

主日崇拜後，請留下與我們一起享用愛宴和十週年的慶生蛋糕 Please join us for lunch and an anniversary cake after the worship service.

我們非常感謝上帝在過去這些年間所賜福於我們的，以及為祂自己的榮耀使用我們來成就祂的工 We are so thankful for all that God has done to bless us and use us for His glory the past years.

我們把我們的教會和未來都交託給上帝 We want to commit our church and our future to God.

期待這個主日能在教會與您相會！ Looking forward to seeing you there.

Posted by taiwanchurch at 10:24 AM No comments: