Recently, I have been reading parts of the Sermon on the Mount with my children. We had a discussion on how to store up treasures in Heaven. One blessing of growing up in a missionary family is that you have to learn to not hold on tightly to the things of this world. In early August, the girls had to say goodbye to their dog, their favorite toys and places to play, and also to their relatives and church friends and places of familiarity and security. 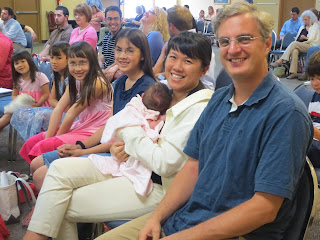 The picture above was taken at one of our last Sunday worship services at Redeemer Presbyterian in Florence, Alabama

Moving back and forth from the field reminds us that we are like Abraham: "And they admitted that they were aliens and strangers on earth. People who say such things show that they are looking for a country of their own. If they had been thinking of the country they had left, they would have had opportunity to return. Instead, they were longing for a better country -- a heavenly one. Therefore God is not ashamed to be called their God, for He has prepared a city for them." (Hebrews 11:13b-16)

The following is Andrew Webb's commentary on how sadly even Christians will store up treasures on earth where moth and rust destroy and thieves break in and steal. It is a great reminder for us:

"I'm sure you've probably heard how they trap Monkeys in Indonesia. I always thought the story was made-up for the purpose of teaching until I actually saw it being done on a National Geographic special some years ago. A monkey trap is made by taking a hollow coconut and making a hole in each end, one large and one small. The small hole is used to attach the coconut to a tree or a stake by a rope and the other larger hole is kept open. Some sweet fruit is then put inside the coconut. Now the hole large enough that an open hand can be put in, but a fist cannot be drawn out. So the monkey comes along, smells the fruit and sees it and reaches into the coconut to get it. His hand closes around the fruit and becomes a fist. And so he's trapped.

The monkey will literally become frantic, especially when the hunters close in on him, but only very rarely will the monkey do what seems so obvious and let go of the fruit in order to draw his hand out. Greed and poor abstract thinking skills keep him trapped and spell his ultimate doom. I always thought it was particularly sad that he doesn't even get to enjoy the fruit that was used to trap him.

"Silly monkey!" I mean, you laugh at the silliness of a creature that can be destroyed simply through it's unrelenting greed. And yet, the devil has successfully been using the same sort of trap on professing Christians for years. They are doing well, and then something sweet and desirable is offered up to them, their eyes get big, their hearts are filled with lust and they reach out to grab it and… they're trapped. All they would need to do to be free is let it go, to repent of their decision, but they can't, they'll become frantic with worry and make ship-wreck of their faith first. Paul knew the sadness of watching this awful process "Demas, having loved this present world, has deserted me and gone to Thessalonica" he writes in his last prison epistle.

Now you know if they do indeed leave the faith and never return it indicates that they were never truly converted "They went out from us, but they were not really of us; for if they had been of us, they would have remained with us; but they went out, so that it would be shown that they all are not of us." (1 John 2:19) If what they truly treasure are the fleeting things of this world: possessions, honors, pleasures, it shows that their heart never truly was Christ's for as Leon Morris put it:

"The Heart and the Treasure go together. Anyone's heart, the concentration of his energies and interests, is always with his treasure, i.e. the things he values most"

But that knowledge is cold comfort indeed for the aching heart of the Pastor who sees it happen to one entrusted to his spiritual care. I would much rather endure a personal loss than watch a person come near to the kingdom and then walk away like the rich young ruler because they love the fleeting treasures of the world more than Jesus.

Posted by taiwanchurch at 11:46 PM No comments: